Is collaborative consumption actually new? We think not.

We’ve just realised that collaborative consumption* is not actually big news. From TVs to rubber ducks, our clever ancestors have been sharing resources for years, and often paying for the privilege.

It’s nice sometimes to think that 9flats isn’t part of a take-take-take economy, but a pioneer of the innovative, new collaborative consumption movement: helping people make better use of existing resources and become more social at the same time.

But hold on, is it actually new idea?

We were talking about this in the office today and thought collaborative consumption models have been around for a very long time. They just didn’t have a fancy name. Here are six early adopter examples that we could think of. Any we’ve missed? 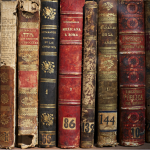 This is perhaps the most blindingly obvious, and yet most unnassuming example. All the books you could ever want, available for you to share, complete with fingerprints, and sometimes notes in the margin, of many readers before you. There is of course Book Crossing, which is a more modern, international version, but we think libraries deserve a big shout out for being brilliant and underrated (except when you get a fine and a telling off for being late). (photo: Maguis & David)

I was at a folk park in the gorgeous German village, Lübbenau, recently and they explained how it used to be too expensive for families to have an oven in their own house, so they would all come and cook their bread in a big village oven. We even have a 9flat there so you can go find out for yourself.(photo: net_efekt)

My grandparents were lucky enough to be one of a few people to have a TV in a 1950s rural Irish town. It was expected that most weekends the house would be full of neighbours wanting to curl up collaboratively in front of the telly. As is often a nice side effect of sharing resources, these were very social events and usually ended in singsongs and storytelling sessions around the fire. (photo: hartman045)

Remember the time when old buildings used to have communal kitchens and bathrooms, shared between a few families? Me neither actually, but I quite like the thought of cooking together harmoniously with my neighbours. Not sure about the shared bathroom idea though. (photo: daviddennisphotos.com)

Mmm, the smell of leather worn by 287 eager ten-pin bowlers before you. Still though, it’s sharing, and it’s been around for a long time. (photo: Eric Grossnickle) 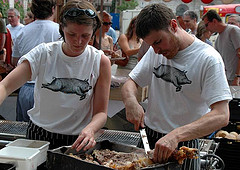 Perhaps a bit obscure, but this is collaborative consumption the literal way. A whole village, fed with just one animal and a bottle of ketchup. There must be better examples of food that we share or eat together, but I can’t think of any right now. Terry’s Chocolate Oranges? Rotating lazy susans at Chinese restaurants? (photo: zorilla)

So that’s it. I think it’s time these were dusted off and given the recognition they deserve. A big round of applause for these pioneering, early collaborative consumers please. Now, after this little look backwards, off we go back to into the land of peer-to-peer rentals, bug-fixing and other such new-fangled things.

*If you’re still stuck at the words ‘collaborative’ and ‘consumption’ you can find out more, and see some cute infographics, here: collaborativeconsumption.com)