For those of you who have been following this blog, you will have read my article about the Edinburgh Festival. On Sunday I went through for the day to see some shows. Here are the best parts of what I saw. 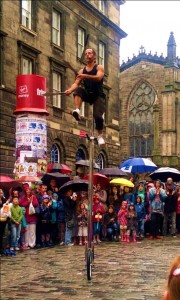 The Royal Mile (famous road that goes from Holyrood Palace to Edinburgh Castle) is full of street performers doing their shows. Despite it being a rainy day, the best performers were attracting crowds of around two hundred people. These performers come from all over the World and perform for free, relying on tips. Consequently, it’s important to give a good tip if you enjoyed the show. If you don’t want to leave money at the end, don’t watch the show, this is the performer’s job and they deserve to be paid!

One of the performers we watched was “Dynamite”, from Toronto. His show included juggling; machetes, chainsaws, an audience member’s child and ended with him riding a huge uni-cycle whilst juggling machetes!
From start to finish, Dynamite had the audience captivated and put on a great show.

My favourite part of the festival is the comedy. The festival is a great place for not only discovering new comic acts but also for the acts themselves to be discovered and hopefully propelled into stardom. The act I saw and which stuck out the most was Agonise, put on by Ria Lina and Steve n Allen. Agonise is part of the ‘Free Festival’ which is a collection of free shows, like the street performers, the idea is you leave a donation at the end. 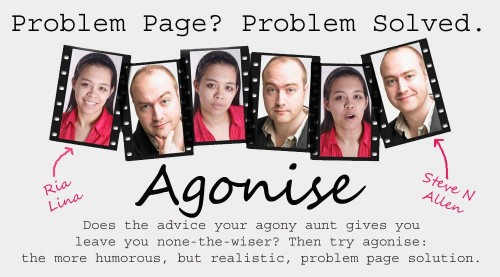 Every once in a while, the Free Festival delivers a little gem, Agonise, with Ria Lina and Steve N Allen is one of these gems. Based on the premise of their podcasts: that agony aunts don’t deliver the best advice because they don’t have enough life experience. They use a combination of stand-up comedy and audience interaction to entertain and make you laugh for the hour you are there.

It quickly becomes clear that these two comics know what they are doing. First and most importantly, their show has a theme. Just as a play needs a plot, stand-up comedy does too. “Cause we’re funny” just doesn’t cut it. But, in the case of Agonise, the theme of problem page solutions, while deceptively simple, is remarkably effective. It struck a chord with people before they’d even entered the room creating an audience that was wanting and eager for comedy. All Lina and Allen had to do was deliver, and they did: solid and impeccable comedy, for the next hour. 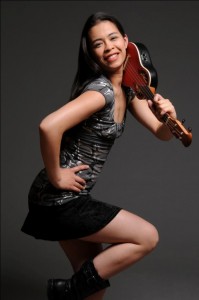 Lina and Allen have different styles that complement each other well. Lina is a musical comic that takes you on a journey with her music that even though you don’t know where you’re going – you don’t want the ride to stop. In between songs she kept us entertained with well-written one liners and stories demonstrating her abilities as an all-round comedian and entertainer. She definitely left you wanting to hear more than the three or four songs and stories she had time for. Which begs the question of why was she not doing her own show since she is clearly more than up to the task?

Researching Lina after the show I found out that she has won multiple comedy awards as well as appearing on; the BBC, Comedy Central and Channel 4 amongst other achievements.

Allen, on the other hand, is old school, just his voice, his words and the mic, no ukuleles here! He takes control of the room and instantly makes the audience relax since they know they are in the hands of a professional. Unlike Lina’s edgier style and content, Allen is more accessible, dealing with topics such as dating, rowing with partners and late trains. His slick style and assured demeanour could have stepped right off the television and onto stage, half making me wonder whether I should know him from somewhere else.

Not all free shows are good, however not all paid shows are either. Comedy is very subjective but I don’t think anyone could find Agonise anything but great. Overall, Agonise is comedy genius, a mixture of fantastic songs sung by Lina whilst playing the Ukulele and quick wit and great banter with the audience. Lina and Steve have both put on a great show and have the potential to go all the way to the top, which I really hope they do.

Agonise is performed daily at 9.45pm in Espionage, click here for full details. Remember that it is a “free” show, so do tip well if you liked it at the end.
9flats.com has plenty of great accommodation in Edinburgh but you need to book months in advance to get it during the festival. However, you can do as I did and stay in Glasgow and get the train through for the day. 9flats.com has some excellent new properties in Glasgow, how about this classy city centre apartment?