How many swallows make an Indian summer? 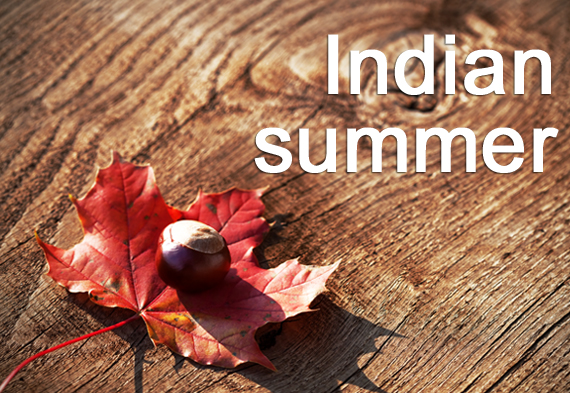 What exactly is an Indian summer,
and where can you find one?

We were talking about what to write about in our next newsletter, and not wanting to say goodbye to the bright Berlin sunshine (yet unable to deny the falling temperatures, and leaves), we thought Indian summer would be a nice topic. Especially as it’s a North American term, and we’ve just welcomed thousands of new hosts in America and Canada from iStopOver (who went live on 9flats last week!).

Problem was, half of us didn’t actually know what it was. So we asked around the office, and here, according to our very international 9flats team, is what an Indian summer is in their countries:

“An Indian summer is the ‘fifth season’ that sometimes happens in the middle of Autumn in the northern hemisphere when the temperatures suddenly rise for a short time. Usually in October or November, after a hard frost. During this time, the Canadian countryside, looks really beautiful, and because it’s so warm, you can spend more time out in the open. Many people come to see this beautiful natural phenomenon in places like Banff. It happens in the US too, and is best experienced in places like Yosemite National Park (where they have an Indian Summer Blues Festival). If you’re going on a city trip, parks and green spaces in cities like Toronto and New York can play host to this colourful, but short-lived season.”

“This is the German term for Indian summer. Many Germans think it means ‘old women’s summer’, but in fact the ‘weiber’ part comes from an ancient word meaning ‘to weave’. Spiders love this time of year, and to celebrate, they weave huge webs in forests and parks. Even if you don’t like spiders (and I really don’t!), you can’t help but be impressed by the intricate spirals of threads, especially when the morning sun makes the dew drops look like thousands of strings of little pearls. I like this time of the year very much. I usually go home at weekends to go mushroom picking, or ‘Pilze suchen’ in German, with my father.”

“I remember the Japanese being very proud of telling me they had four very distinct seasons (as opposed to the mild Irish climate), and even a fifth ‘rainy season’ in May/June. This is also known as ‘tsuyu’ or ‘plum rain’ as it happens when the plums appear on the trees. Then there’s of course the ‘sixth’ cherry blossom season, when you can sit under the trees sipping sake at Hanami, or flower viewing, parties. I don’t think Indian summer is a term used much, but in Japanese it’s called ‘small spring’, as it’s a short period of warmth, reminiscent of a mini-springtime.”

“Once upon a time, says the legend, a Roman knight saw an old beggar. The day was rainy and cold, and the old man was soaked and hungry. The knight, named Martin, was filled with pity and cut his own cloak in half with the sword. He gave one half to the beggar and then departed. Suddenly, the rain stopped and a beautiful sun appeared in the sky.

This legend is the reason why the Portuguese celebrate ‘St Martin’s Summer’, a week in the beginning of November when the weather suddenly changes and, instead of the usual rain, the sun comes out. During this week, we get together and eat chestnuts and drink ‘Água pé’ or ‘Jeropiga’, made by adding water to what’s left from the pressed wine grapes. We call this festivity ‘Magusto’.

Seems like some other countries celebrate St. Martin’s day too. And, look, seems like all of this is related to Indian summer.”

“‘St Martin’s Summer’ is so called because people in Britain noticed there seemed to be a short, warm spell around the time of St. Martin’s Day, on 11 November, after the summer had ended. It was also known as ‘St Luke’s Summer’ and ‘All-Halloween Summer’. These terms aren’t used anymore, and I’m not sure how many people in the UK would use the term Indian summer either. Actually, I had to look it up on Wikipedia myself! Although I have just seen that there was an Indian summer this year in the UK.”

Do you have Indian summer in your country?