My first time in Frankfurt

I’m on my way again! Not on the streets of Berlin, but this time on the German motorway. I booked with 9flats for the first time today and am now headed to Germany’s centre – Frankfurt!

Frankfurt is known best for its bankers, the largest airport in Germany and its high density of candy dispensing machines. I have never seen so many chocolate dispensing machines in a subway! Every platform had one, great for chocoholics like me! However, there is more to Frankfurt, such as my incredibly organised hosts who have planned my trip for me from their current location in Spain!

Marc lets a few apartments in Frankfurt. Normally he would have been there to greet me, but he had to extend his stay in Spain as he is opening a delicacy shop there and needed to get on with the preparations. 3000 km away, he organised a pick-up service and evening entertainment for me. I’m impressed! Georg, who is in charge of everything, meets me at the train station, carries my luggage to Marc’s apartment HD Studio, which is just round the corner. The location is great, in central Sachsenhausen, which is Frankfurts equivalent to Prenzlauer Berg in Berlin. Hip, diverse, with cool people and unique shops. There’s the bank of the river Main, museums and loads of working mums. George and I take the lift to the second floor and enter the flat. The view is stunning!

I can see the Commerzbank tower, the European Central Bank and the TV tower. Beautiful view ad beautiful room, which is very girly: purple walls, purple curtains, flowery lamps, white furnitures and shelves that would fit at least 40 pairs of shoes. The bedding is mainly pale blue, but the pinky-red flowers dominate. There’s a bedroom with a desk and the great view, as well as a small kitchenette and a bathroom. There’s also a separate living room on the ground floor – the Pudelkönig. 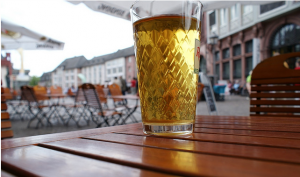 Here you can cosy up in the evening, drink some cider, enjoy some regional specialities and then take the lift up and drop into bed! I discovered an amazing side of Frankfurt and hope to meet Marc personally at some point, preferably in Marbella, where he lets another apartment!