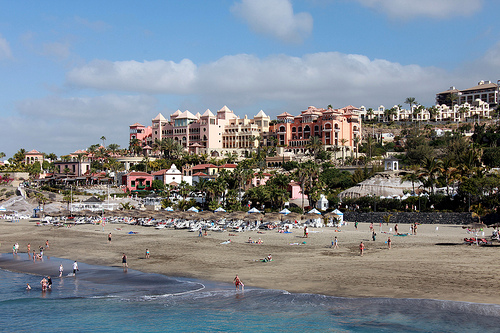 Moving on from the Balearic Islands now, 9flats has decided to stay in Spain for a little longer and look at another popular destination, the Canary Islands in the Atlantic Ocean, and begin with Tenerife, the most populated island of Spain.

One of the island’s most interesting aspects is that its location and climate is very different from the rest of Spain. The Canary Islands have a subtropical climate, allowing travelers alike to enjoy warm temperatures all year round. In Tenerife the average temperature is 18 ° C in the winter and 25 ° C in the summer so this is a perfect destination to escape cold winter.

Tourism is the main source of income for Tenerife. Travelers from around the world flock there to enjoy its beaches, its culture and nightlife. Most of the hotels on the island are located in the south, around the cities of Adeje and Arona. Among the best beaches in Tenerife, we can highlight the Los Cristianos, Playa de las Galletas, Playa de Las Vistas, Playa de Las Teresitas or Playa de las Americas.
Beyond just beaches, Tenerife has some must-sees, as the Teide National Park (the most visited national park in Europe and second in the world). The national park offers sights of the third largest volcano in the world, the volcano Teide, and the highest mountain of Spain, with a height of 3,718 meters.

Nature lovers will love the area known as El Barranco del Infierno, a beautiful natural reserve with many endemic species; there are also many archaeological remains of the Guanches, the original inhabitants of the islands in the reserve’s gorge.

On 9flats.com there are many apartments to rent in Tenerife.

Take a look at this beautiful cabin in Icod de los Vinos or this apartment with spectacular views of Mount Teide.