We talked about Jamie in previous blog entries, who at the age of 19 aimed to travel to 19 cities in 19 days to give motivational talks to young people. 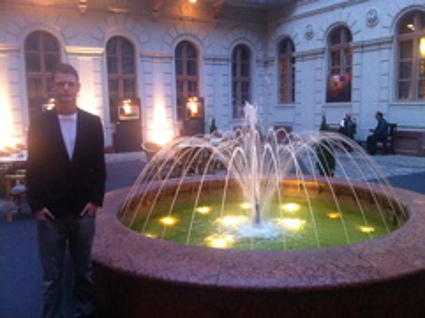 So, did Jamie manage to complete the challenge? Nearly! He managed to take in 10 countries, which is an amazing achievement in itself.

Jamie seems to have had luck in stumbling upon one great thing to experience in each city. After Berlin, Jamie headed off to Bratislava. At the castle he watched a battle re-enactment where hundreds of people in soldier, peasant, king and queen costumes wandered through the winding streets of the city.

But, no rest for the wicked, the next day he was off to Budapest and as if that wasn’t enough, being a busy public speaker, en route Jamie received an invitation to speak at the Global Entrepreneurship Week in Vienna in November 2011. After the crazy daily travelling of the previous days, Jamie decided to stay for a few days in Budapest. Whilst there he delivered a speech that struck one woman so much that she wrote Jamie a letter to take back with him to England.

Jamie was due to fly to Athens and from there back to Birmingham in England, but his travel agent advised against it and so he flew directly home where he is now recovering from his whistle-stop tour and will have plenty of time to prepare his speech for the Global Entrepreneurship Week in November.

Upon his return, Jamie himself wrote a short trip evaluation, which you can read here.